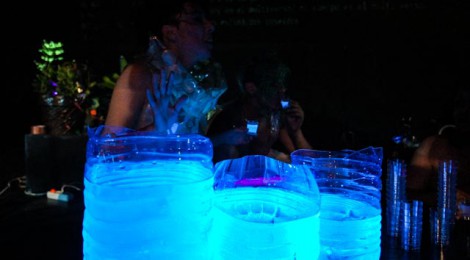 “What a strange place! And these weird people! If you could call them people!… There is no way you could define what they are. Full of these artifacts over their bodies, you wouldn’t know where their flesh begins and where the rest starts. What a strange way of moving! Look! They approach and they touch each other. But what are they doing? What unsuitable practices to obtain pleasure! It seems like they have different organs, or what? You understand nothing they say, it looks as if they were invoking a spirit. Or do they engage with the malignant?

These gadgets that they manipulate, don’t seem Christian at all, there has to be a power given out of the malefic union… and then, I have no clue if they speak through the apparatus or if it is the other way around… But why is it changing all the time? All is being constantly transformed, or am I hallucinating? Why do I think of all of this?”

Akelarre 2.0 is a project that unites the experiences and inquietudes of  Quimera Rosa & Transnoise, so as to prepare an interdisciplinary performance of approximately one hour of duration.

The artwork is composed by an interaction of bodies, machines and surroundings. The performers, whose bodies are modified through different kinds of prosthetics, sketch via their encounters, hybrid identities that search to escape an infinite list of dichotomies: Natural/ artificial, humane/ machine, human/ animal, man/ woman, homo/hetero, art/life, science/ pre-technologic, etc.

This performance is based on a re-appropriation of the notion of witchcraft, entirely distanced from any associations to black magic, esoterism, or other definitions produced by the medieval catholicism, the colonization, fairy tales or Disney’s films.

If we distance from these definitions, we find ourselves inside a set of practices, that through the manipulation of symbols, bodies, substances, objects, views and spaces, aim at the modification/creation of our identities, relationships, and surroundings. A mixture of practices that witches used to name “art“ or “arts“, from which we could assume that they could call themselves… “artists“. So, the covens were encounters of collective art.

The notion of ‘coven’, applied to the performance, has nothing to do with any theatrical approach. Leaving aside any notions of representation or expressiveness, we go for replacing them, by those of investigation and experimentation.

The akelarre is not a demonstration of what the witches are, either is the place where the participants pretend to be witches. The akelarre is becoming-witch (Devenir).

Photosynthetik transmutation. concert same as an ecosystem, a system of attentive listening of the nature, revealing the not audible through the multiplicity of NOISE

Collective Rituals Santa Mari Vitch. The covens were gatherings between witches that through a set of practices, the manipulation of symbols, bodies, objects, signs and surroundings, aim at the creation / modification of the world.

This project started with a residence Akelarre Yaku